Travel in Italy – Known worldwide for its cultural effervescence. Selected sights of Rome, free attractions for you. Enjoy!

Travel in Italy. Rome is known worldwide for its cultural effervescence. We selected free attractions for you to enjoy the city without spending. 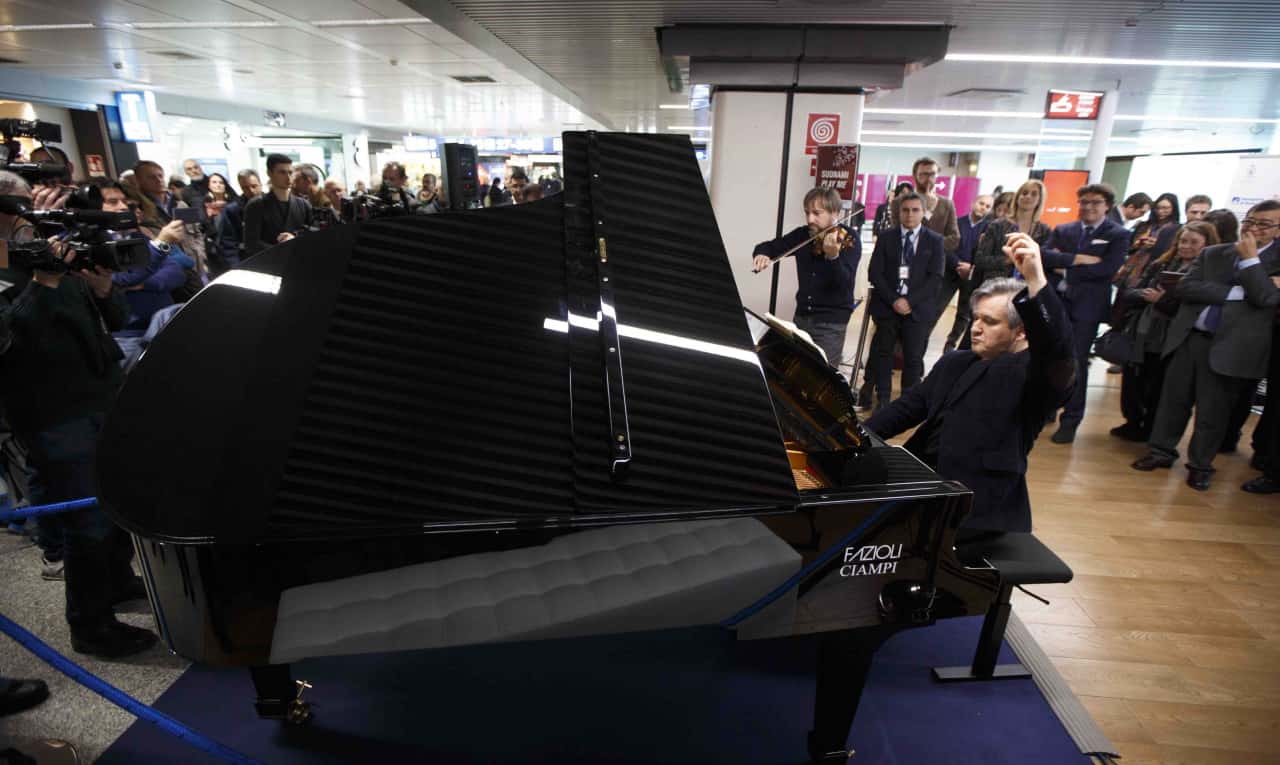 It opens with a first cycle of musical events promoted by Rome Fiumicino Airport in partnership with the National Academy of Santa Cecilia.

Antonio Pappano, from London, sits at the piano at Terminal 1 boarding along with Carlo Maria Parazzoli first violinist of the Orchestra of the National Academy of Santa Cecilia.

Noteworthy are the solo recital of two of the best students of Piano Master Class Academy. Classics like Mozart for Woodwind Ensemble of JuniOrchestra and Haydn to Wolferl Trio (composed of professors from the Academy Orchestra). The evergreen pop music with brass JuniOrchestra, the choir performing a Mass in the Jazz version and Gloria of Vivaldi, and Soloists Choir who played the tradition of Italian opera and the Neapolitan song. 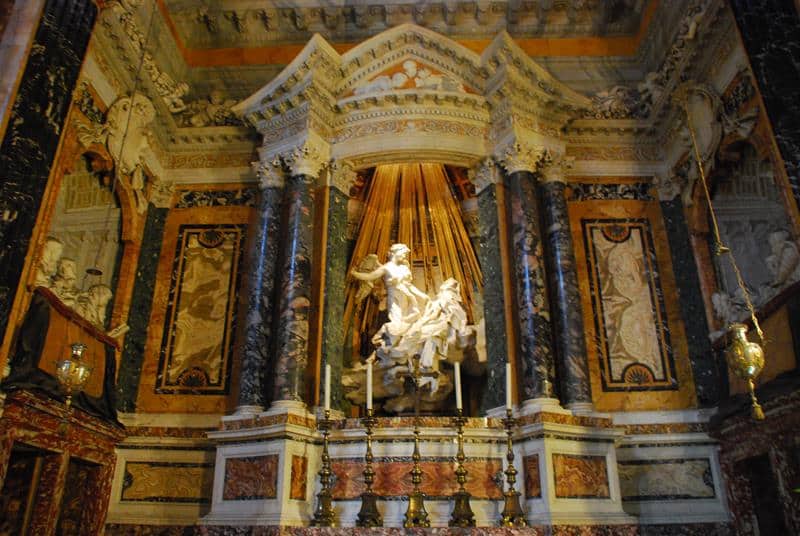 Santa Maria della Vittoria is a small Baroque church in Rome, in Via XX Settembre. Built in honor of São Paulo, in 1605, the Carmelites.

In 1620 he was dedicated to the Virgin Mary Queen of Victory. In Cornaro chapel we can find one of the most beautiful baroque sculptures, Ecstasy of Saint Teresa, Bernini.

This church became known worldwide through the film “Angels and Demons”, based on the novel by Dan Brown. Its small footprint does not follow its immeasurable beauty and wealth. Be the altar, the ceiling, the dome, the apse, the frescos, the organ, are other chapels and sculptures, every detail, everything is incredibly beautiful and beautifully baroque.

Maxentius, the last great Roman emperor defeated by Constantine at the Battle of Milvian Bridge.

He had a large residential complex on Via Appia Antica. Next to the palace there were two other buildings: a circus for particulare shows and a dynastic mausoleum, the tomb of Romulus, the son who died prematurely.

The important archaeological site is now within the Appia Ancient Regional Park. Created in 1988 to protect and preserve the historical and natural landscape of the latter part of the roman area. Today only 5% of its 3400 hectares is state-owned.

Walking through Via Appia, the Villa of Maxentius to the Cecilia Metella Mausoleum in ancient times led it to the road as Regina Viarum. Strategic and military road built in 312 BC in Appio Claudio, who today became the highway linking Rome to the port of Brindisi in Puglia, connection to the coast of the eastern mediterranean. 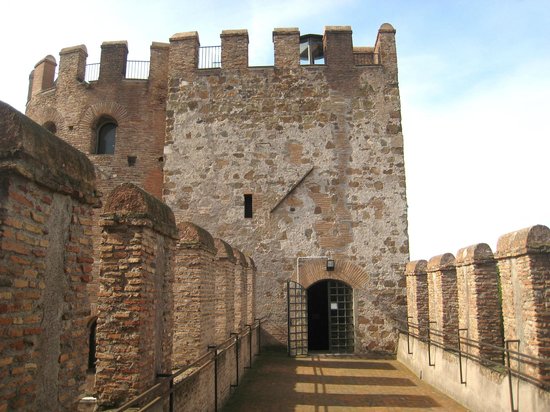 Museum delle Mure is possible to access to a long stretch, about 350 meters under the walls, which is presented as an interleaved covered gallery for ten towers. A walkway discovery, repaired under the battlements at the top of the wall. Along the way they are preserved ancient masonry Honorius (early 5th century).

With niche slits for archers, and large open arches on the opposite side of the city, beyond the stairs within a few towers that were used to access the higher operating rooms today no longer exists.

Some restorations are evident in later periods, from the Middle Ages until the 19th century. Recognizable by the different construction techniques or by transforming some structures on the walls. Note to square loopholes that dates back to 1848, transformed to fit the rifle during the shooting of the Roman Republic.

Of particular interest coming out of the third tower on the catwalk: the land is still the original flooring with a central groove, which marks the seam between the Aurelian structure. The forthcoming enlargement made by Honorius, a painting of Our Lady with the Child, the tower using the memory as a retreat of a hermit, probably in the Middle Ages. 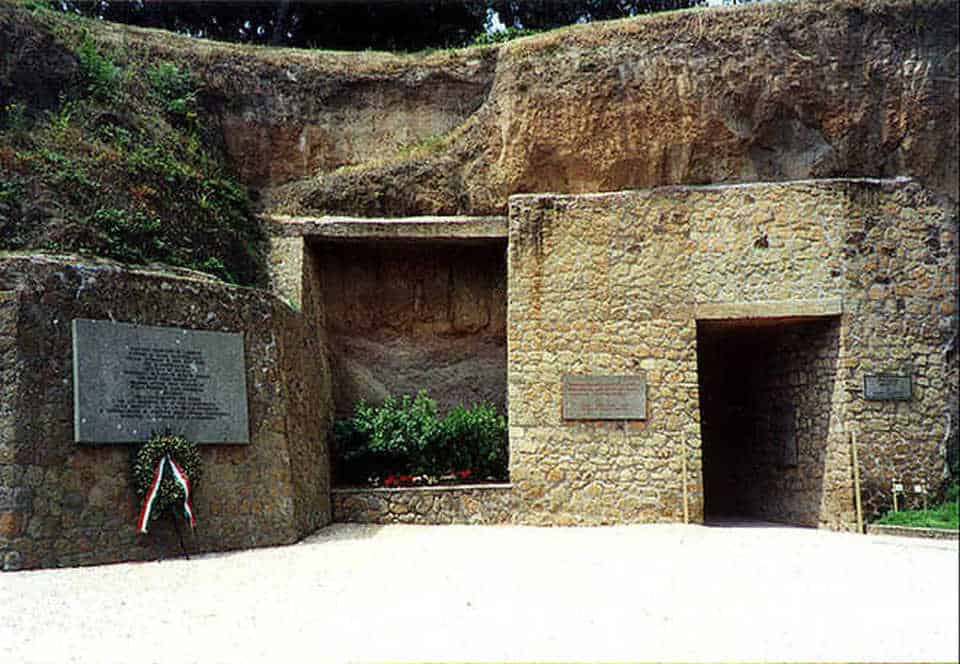 On March 23, 1944, in an act of war against the Germans in Rome, Via Rasella, a group of GAP supporters killed 33 soldiers and wounded 38.

Bozen battalion blew up a charge and attacked the enemy column with automatic weapons and throwing bombs.

Following this partisan action, Hitler announced that Rome should be completely destroyed and the population deported. Soon he rectified saying that as revenge, would be enough to destroy the entire neighborhood where the action occurred.

Finally Kesselring and the commander in charge in Rome, Kurt Maeltzer, establish revenge: ten Italians for every dead German soldier.

The massacre came immediately and was commanded by colonel Herbert Kappler, assisted by captain Priebke. The day after the party action, 335 Italian men were murdered in the Ardeatine, each shot in the neck.

Most of the victims were from the prison of Regina Coeli and the Via Tasso command, fifty were selected and delivered to the fascist Superintendent Caruso. Today the site is one of the monuments symbolizing strength. At its entrance there are three figures in travertine to idealize the victims. A tunnel leads to the old quarry pozzolan, execution where there is the Sanctuary. 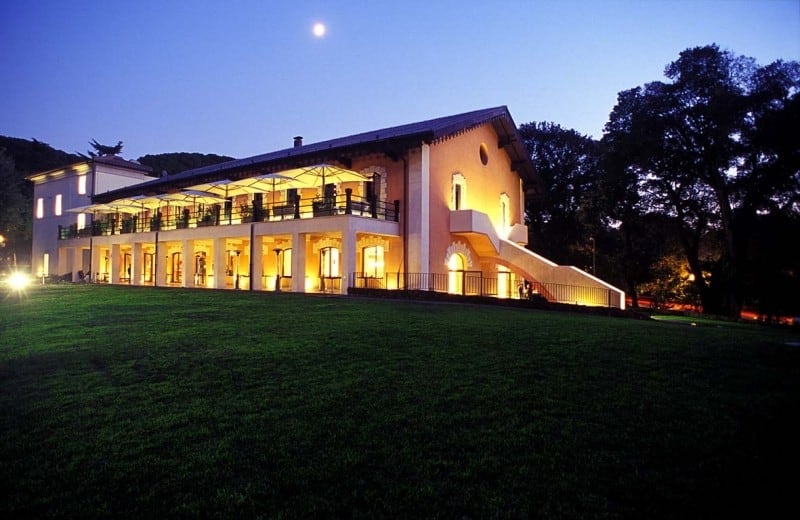 The building, formerly known as “House of the Rose,” was completely restored in 2001 and transformed into the “House of Cinema“. Inside the building, in an area of 2,500 square meters, the excellence of the film.

The deluxe room equipped with modern projection and sound systems and latest equipment for video projection high-definition digital. Numerous small meeting rooms and an outdoor cinema. The House of Cinema receives national and international exhibitions every year with the simultaneous display of films as well as numerous events such as meetings, parties, conferences and much more.

It took 516 days to restore the Trevi Fountain, but in the end the statue of Neptune again the undisputed king. At nightfall, in a full expectation of emotion leads to romans and tourists to see the magic of the Trevi Fountain which began gushing water being accompanied by lighting effects streets.

Marble and travertine restored to its former splendor, gave his best in this opening, keeping the original idea of Nicola Salvi, who built it in 1732.

Using the terminal point of the ancient aqueduct of the Virgin Water (Aqua Virgo), built by Marcus Agrippa in Vispanio 19th century BC a restoration made “at home”, all Italian, made possible by € 2 million provided by the Fendi fashion house and LED lighting Acea.

An innovative restoration, which thanks to the panoramic bridge mounted on the work, which received 100-250 people at the same time, you could see “near” the source and admire hardly visible particular. Along the fence construction site, panels transparent acrylic, which were installed two screens showing recent pictures and history related to source.

With an operation that lasted 90 days, it was installed a new lighting art in the square and the Trevi Fountain. Over 100 LED lamps were placed at strategic points of the complex to better define the lighting, emphasizing the artistic structure of the 18th century.

Previous PostThe Best Vacation. In this article we offer a selection of spectacular Caves of Italy of Italy. Grottos than hides an irresistible charm! Next PostHolidays to Italy - Discover the 6 Great Places For the Best Tours