The Best Vacation. In this article we offer a selection of spectacular Caves of Italy of Italy. Grottos than hides an irresistible charm! 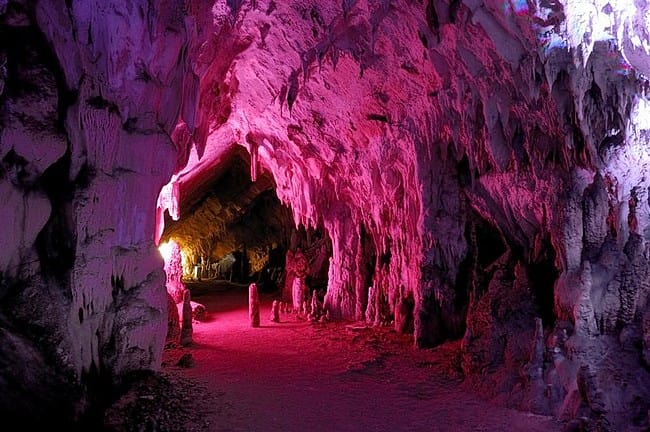 Caves of Italy – Top 10 most Spectacular for The Best Vacation. What are the most interesting and spectacular caves in Italy to visit? In this article we offer a selection of Top 10 most spectacular caves in Italy. Caves and grottos than hides an irresistible charm used since prehistoric times as housing, before the construction of the huts. Over the centuries as shelters for the population for escape from wars and plunder, major natural disasters, or as a simple place to hide riches individual

In the stories and legends for children, the caves would be refuges of ogres, wolves, demons and monsters of all kinds. Where you could live a thousand adventures, and so maybe, like a charm, leaves get out  the curious child and adventurous that is within each of us.

The visit a cave is a special experience in the intricacies of the land, including stalagmites, stalactites, lakes and underground rivers, colored rocks and crystals that create a magical and fairy tale.

Today, the caves can be visited in complete safety on walkways and well constructed paths, accompanied by expert guides who will make you live an unforgettable experience. Italy is rich in caves and in this article we will list the 10 most beautiful caves and famous in our country. It is not a ranking but a simple list. 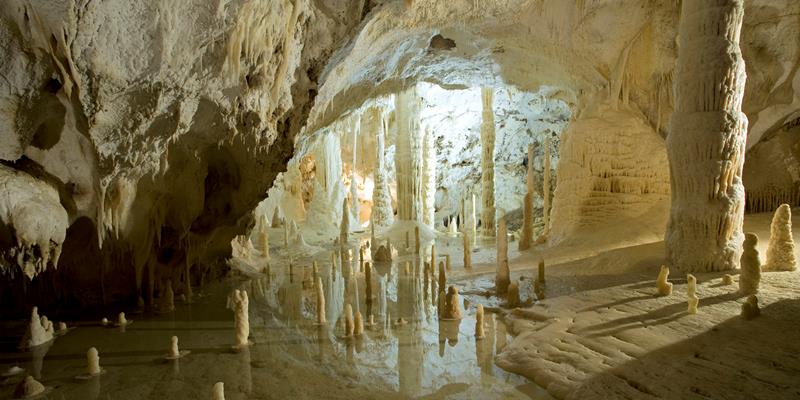 Vacation in Italy. Located about 40 km from Bari, Castellana caves were known since antiquity, although the ancients knew and use only the first part, called the Grave, and gives the cave legends associated with magic and demons.

Years and years of explorations uncovered a 3 km length and 73 m depth system, with two possible footpaths for visitors: a short one of 1 km (to be done in one hour) and a long one.

This is the most interesting one as it gives the tourist the chance to appreciate all beauties of the natural environment (2 hours time).

It is almost like a game between the well-prepared guides and the tourists. All along the path the tour guide and tourists try together to read nature’s work and with some imagination, it feels like being in the middle of a fairy tale, where every stone is an imagine or a character ready to be discovered. That’s why tourists need to be ready for the Lupa Capitolina, the Caverna dei Monumenti, the Caverna della Civetta, Corridoio del Serpente or the so-called Gran Canyon, particular for its red colour due to ferrous minerals.

But this is nothing compared to the most secret and amazing part of the visit: the Grotta Bianca, invaluable real treasure and pride for the local community for its brightness and uniqueness. Having been also to caves abroad, I can honestly say with some “pugliese” proud that the viewing of the Grotta Bianca is unique and unrepeatable. The whiteness, mixed up to ray of lights, leaves you speechless in front of Nature’s majesty that has created such a picturesque portrait.

All the minerals were formed during long times in undisturbed, limestone rich water. The common speleothems, stalactites and stalagmites were formed first, but later covered by the various crystals. The results are stalactites overcrusted by calcite crystals at the lower end, up to the former level of the cave lake, looking like toilet brushes or water lilies. 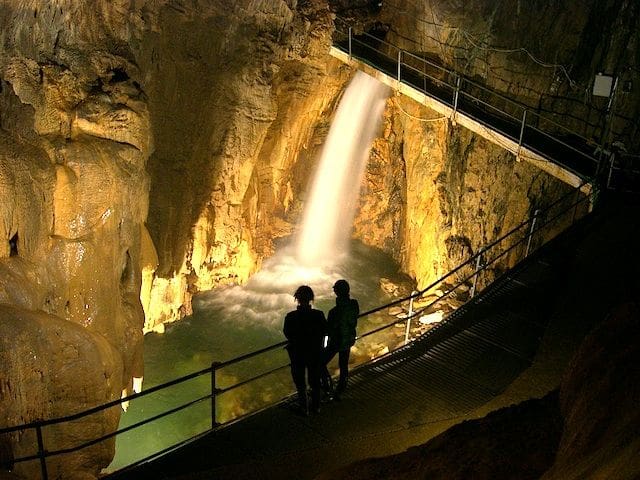 The caves are part of a complex cave system that stretches for about 18 kilometers inside the Regional Park of Gola della Rossa and Frasassi, a green oasis rich in history and art.

Discovered in 1971 and opened to the public since 1974, the spectacular caves have already been visited by over ten million people.

In about an hour of quiet and easy route you can admire the masterpieces of the involuntary nature enhanced by a clever use of lighting, the work of production designer Cesarini from Senigallia.

Small lakes, stalactites, stalagmites shining, with arabesques salt crystal and alabaster. Just a kilometer and a half from the caves also on foot going towards the cavity suggestive: his cave, you will find an ancient monastery and the nineteenth-century temple of Valadier.

There is about an hour of easy walking through a maze of spacious pathways. Magnificent ‘rooms’ which reveal nature’s masterpieces in this strange and beautiful underground world are given the most ingenious names: The majestic Ancona Abyss, The Infinite Hall, The Hall of Candles,

The Obelisk and The Emerald Lake. Small sparkling lakes with pools of clear still water, extravagantly fanciful stalactites, towering columns of stalagmites and alabaster spears adorn these caverns. The caves are further enhanced by the skilled use of soft theatrical lighting. The itinerary Frasassi is a journey into a magical underworld. 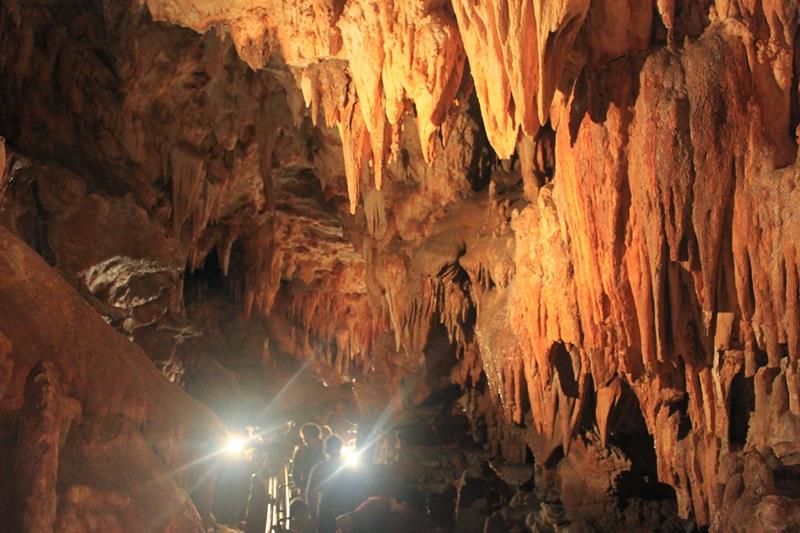 Grotta di Bossea (Cave of the Bear) is a cave located south of Mondovì about 25 km (0.5 hours).

From Mondovì you follow winding roads and pass through small towns to end up in the commune of Frabosa Soprana.

The Grotta is a river cave and karst cave. The volume of water moving through the cave is incredible.

The itinerary takes you through narrow passages and large open spaces until you get to La Cascata, the waterfall at the farthest reach of the cave you can visit.

The cave was first opened to the public in 1874. A scientific research station has been functioning in the cave since 1964. Just when we thought we were alone with the tour guide, we suddenly we came upon the research station and the researchers busy about their work. It’s a working cave. An Ursus spelaeus (cave bear) skeleton is on display in the main gathering area in the cave called the Salone dell’Orso.

The species name refers to the fact that the fossils of the bears are typically found in caves. The skeleton, if we heard the guide correctly, is a composite of many bones found in the cave. The first bones were discovered in 1865 and it is probable that the bones making up the skeleton are from bears that died during hibernation.

A journey into the depth of the earth on the trail of bears of the caverns and prehistoric men.

Marvellous crystals and spectacular stalactites serve as a setting to the itinerary that winds underground for around 1300 metres from the Cave of the Bàsura (“witch” in Ligurian dialect) to the Lower Cave of St. Lucy.

A true journey on the trail of bears in the caverns and prehistoric men.

The itinerary begins from the Bàsura Cave, the most spectacular of all. Here for millennia the bear of the caverns found shelter: remains of bones, paw prints and claw marks have been found on the walls, in addition to prints of feet, hands and knees engraved in the clay by prehistoric men dating back to around 12,000-12,500 years ago.

You pass in front of the stalagmite called Tower in Pisa and it is easy to understand the reason why. The witch’s Living room, the Bundle Room and the Corridor of Prints to reach a little underground pond populated by blind crustaceans. After the flow of alabaster in reed shapes called the organ, you visits the Cemetery of bears and the Room of Mysteries.

A tunnel 110 metres long connects the Bàsura Cave to the Lower Cave of St. Lucy, rich in salt with crystals, stalagmitic formations and very fascinating stalactites like the Pantheon Room, the Alabaster Corridor and the Capital Room. It will really seem to you that the time machine has taken you back to the Stone Age!

The Giant Caves is a cave located in the municipality of Sgonico, on the Italian side of the Trieste Carso. The exceptional dimensions of its central cavern 107 meters (351 ft) high, 65 meters (213 ft) wide and 130 meters (430 ft) long.
In the 1995 Guinness Book of Records as the world’s largest tourist cave. Because of its enormous height the stalagmites inside the cave have a particular, “dish-pile” appearance, caused by the water dropping from up to 80 m (260ft) above. Comfortable shoes and clothing appropriate for the constant temperature of 11°C are recommended.

Previous PostRome Tours - Discover the best things to do, top tours and attractions in the Eternal City Next PostTravel in Italy - Known worldwide for its cultural effervescence. Selected sights of Rome, free attractions for you. Enjoy!