Tours from Rome to Assisi: Travel in great comfort and style on one of our tours

Tours from Rome to Assisi, and the small towns of Orvieto and Viterbo in the mountainous and ample green lawns region of Umbria. Medieval towns, origins of the Etruscan civilization, of 9th century a.C, religious, amid the stunning countryside. to visit the region of Umbria, best ways is to move around  by car.

Just a full day is enough to get to know the city. Check out the main tourist attractions that you should visit during your trip.
The first point to visit in Assisi is the Basilica of Saint Francis of Assisi, considered a World Heritage Site since 2000 and composed of the lower and upper parts. You will start your tour at the top (the entrance is through the arcade of the Franciscan friars’ convent).

Those who like works of art will be enchanted by the frescoes by Giotto and Cimabue that are present on the sides of the basilica. Not to mention the stained glass windows that allow the passage of light into the interior of the church. The ceiling has so many details that you will lose yourself in time, with your head up, admiring each element.

The Basilica of Santa Maria dos Anjos was built between 1569 and 1679 around the Porziuncula, a small church considered a sacred place for the Franciscans. 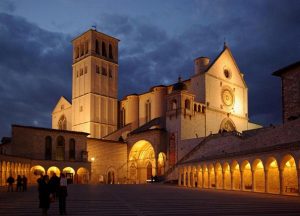 This is because it was in this small chapel that Francis of Assisi, at the age of 25, understood his vocation and renounced the comfort offered by his family to live among the poorest, thus starting the Franciscan movement.

This space always has many pilgrims and brings a great emotional charge to the devotees of San Francisco.

The Catholic Church of Santa Maria over Minerva is also called the Temple of Minerva and was built in the 1st century BC. Standing for thousands of years, the building has withstood time and several earthquakes that hit the region.

It’s a super beautiful place to take pictures (in front of the columns). The interior of the church was restored in the 17th century and decorated in the Baroque style.

Important!
If you want to enter the churches of Italy, take note of this essential tip: be careful when choosing clothes for your outing, as the church considers it disrespectful to leave parts of the body too exposed. Avoid wearing shorts and very short skirts and also don’t go with tank tops, it may be that someone responsible for the church asks you to use a chalet to cover yourself, ok?

The physical effort to go up there will be great, but believe me: it will be worth it! Rocca Maggiore is a fortress that was built in the 13th century because of the wars that took place in the region.

You will come across a castle high above the city that guarantees a privileged view of Assisi.

Assisi is a small city and full of alleys, climbs and stairs. There’s nothing better than starting to wander aimlessly there and “getting lost” along the way. It’s a good feeling, because the city is safe and you don’t have to be afraid of falling into a dangerous alley or anything like that. Just go for a walk, observing each of the buildings with their stone walls, each beautiful monument in the city, such as the Pope’s Tower and the charm of Piazza del Comune.

Our tour, crossing along the Tiber valley, we arrive in Orvieto, a small former Etruscan town, where we can to admire the Duomo, is a magnificent building that brings together different architectural styles.

In particular, we can define a good example and balance of Gothic and Romanesque styles. Located on a limestone cliff of volcanic origin. It is a reddish color that characterizes the entire city: monuments, houses and medieval alleys. The construction began in 1290.

In the historic center is located a Piazza Duomo, then the Pozzo St. Patrick’s a masterpiece of Renaissance architecture designed by Antonio da Sangallo, the order of Pope Clement VII, with the Albornoz Fortezza transformed into a park with a beautiful view of your Terrace.

On foot, we do a walk along of Corso Cavour, arriving at the Torre del Moro with its 40 meters high, in the city center, is open to visitors and the view from the top is breathtaking! 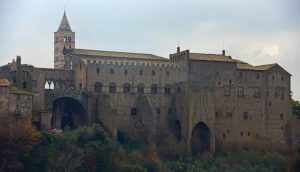 Viterbo was one of the most prosperous cities of medieval Italian. Its was house of the Popes in the second half of the 18th century and today despite the bombings of World War II, maintains the traces of its rich past. We’d recommend start your tour of Viterbo with in 13th-century papal palaces is the most iconic.

The palace hosted the papacy for about two decades, and served as a country residence. The columns of the palace are spolia from a Roman temple.

In the same square, Piazza San Lorenzo, you will find the city’s Cathedral of the 12th century, where there was the first Conclave. The visit continues with the beautiful Villa Lante, one of the most wonderful. churches, slender towers, fountains made with lava stone, typical local stone, and the district of San Pellegrino, unchanged and still retains its medieval charm.

BOOKING – Tours from Rome to Assisi

Step 1: Request a quote
Submit your service request by filling out the quote form below or via whatsapp

Step 2: Get the quote
Once the request has been submitted, you will receive our quote in a few minutes or a few hours.

Step 3: Confirmation
If you are interested in the quote you receive, you can confirm it by simply replying to the email or message.

Next PostTransport to Rome Airport: Private Cars and Minivan with Driver in Rome

Average Rating: 5 stars (based on 7 ratings)

This is the best services that you can have in Rome ! Do not hesitate to get their services ! We had a bless in our travel to Rome with… Read more “I love to travel, who doesn’t? But the best thing you can get is A 5 STAR company to help you when you travel to places in this world.”

We would like to thank you for all the transfers that you have provided to us during our vacation in Rome.
Your speedy responses on email, courteous and polite… Read more “Excellent, courteous service”

Thanks for a great service on Tuesday. Will recommend you to anyone who asks!

Mr Paolo was excellent, arrived on time and very helpful. We will use your services in the future.

Thank you for a great service provided to my family

Fantastic service as usual. Prompt pick-up and comfortable vehicles. Both Federico and Paolo were very pleasant drivers. Would definately reccomend their service.