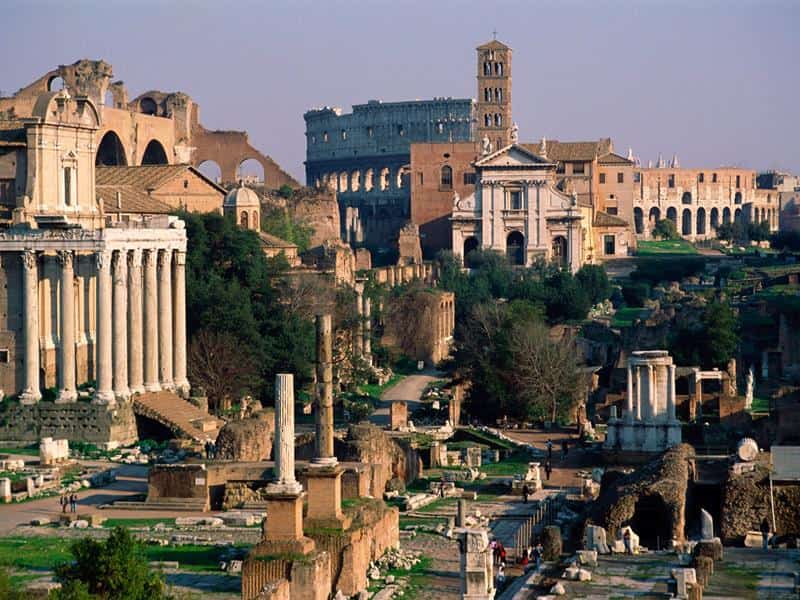 Rome Walking Tours. It rises and solidifies as a political center, religious, legal and administrative of the ancient city. After the valley occupied by the same, between the Palatine hills, Capitol and Quirinal it was swamp, it was sanitized by building the famous Cloaca Maxima, thus becoming in Forum that is in square. Current conditions in which it is the Forum are due more to the action of time, than that of men battering after the fall of the Roman Empire.

It was erected, as the inscription repeated at the bottom and the two facades, the senate and the roman people, in honor of Septimius Severus and Caracalla and Geta to the children. The name was added after his death performed by Caracalla brother. The four large historical panels that are on the side arches illustrate episodes of the victorious wars waged by Severus.

It was erected by the senate decree in memory of Faustina deity, wife of Antoninus Pius.

After the death of the emperor, the temple was dedicated to him also.

In the Middle Ages turned into a devoted and as of 12th century church to St. Lawrence in Miranda.

Oblique streaks running through the tips of the pillars served to tie the ropes when it tried to shoot down the ancient monument.

This is a singular proof of plundering the monuments of the Roman Forum during the Middle Ages.

It was built by order of Augustus in honor of the father apotheosis Julio Cesar. In vain seated on the podium remains the core of a circular altar, built almost certainly where he was cremated his body. Near the altar, Marco Antonio uttered the famous funeral oration:

Friends! Romans! Fellow citizens! provide ear; I came here to bury Caesar and not to praise it! The evil that men practice extends beyond their lives, while good, is often buried along with his bones. 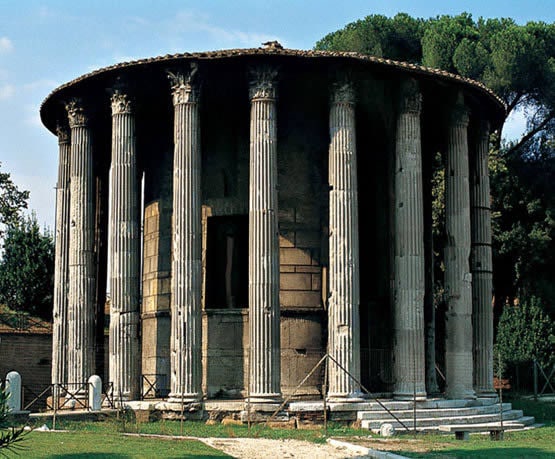 Founded in real time, there was a circular and played the primitive hut project. In this virgin Vestals kept the sacred fire of life of the City.

The six priestesses chosen among the most noble roman families were forced to the priesthood for 30 years. They should obey the vow of chastity and if by chance disobeyed, were sentenced to death, buried alive. The remains of the temple dates back to the 2th century A.D.

It was built by the dictator Aulus Postumius Albino, fulfilling a promise made during the battle near lake Regillus in 499 a.c. and dedicated by the son in 484 a.c.

Legend has it that in this battle the Castor and Pollux twins led the victory the romans against the tarquins and latinos, and immediately after they come to Rome, to give news of the victory, were seen giving drink to their horses in juturna source. And it is in these surroundings that they were dedicated to the temple. (484 a.c.).

The last reconstruction of the Augustan age (6 d.c.) belong to the three existing columns that are of the most elegant of classical antiquity.

It was built after the victory of Azio. On 19 a.c. after the reconquest of the emblem of the “Parti” the two side arches were added. In the interior panels of these arches were applied the Consular Faustos rather the list of consuls and triumphant.

The Roman Forum became, after 5th century, insufficiently to the political needs of Rome so that Julius Caesar thought to expand the political center of the city building a new monumental forum 54a.c. expropriating the expensive land at the foot of the Capitol.

He surfaced to the area creating a complex suitable to the new times.

It was started in 54a.c. by Julio Cesar and completed after his death by Octavian Augustus.

In the center you can see the three columns that belonged to Venus Progenitor time erected as an act of gratitude to the goddess for having guided the Pharsalus victory.

With this forum, Augusto wanted to enlarge the area of the Roman Forum and the Forum of Caesar already crowded. And thus creating a new space for the crowds of all races and colors.

In all parts of the roman world converge to the pulsating heart of the empire.

It was erected to commemorate the victory for Philip in the year 42 a.c. on the conspirators Brutus and Cassius, Julius Caesar’s assassins, but held, and is opened only 40 years later in 2a.c.

Beginning of the 2th century a.c. In fact one round is dedicated to Hercules Olivarius, patron god of oil traders, it is the oldest example of temple in marble preserved in Rome.

The other rectangular, dedicated to Portunus protective deity of the river port. It is one of the best preserved buildings of Rome, perfect in shapes and lines, rare example of Greek-Italic architecture.

Apollo Medical temple was erected in 431 a.c. rebuilt in its present form in 34a.c. the Consul C. Sosius where the name. In this temple the God Apollo was venerated by his healing powers. The cell was adorned with statues and paintings. often met the Senate.

The right of Beluna temple, Roman deity, connected with the war. It was built by Appius Claudius the Blind, in the year 296 a.c. The left is glimpsed the Theatre of Marcellus year 11 a.c.

Previous PostTours in Rome: Underground secrets lead you to the heart of the Eternal City Next PostTuscany Travel: Discover the best attractions Renaissance art and architecture