Tours in Rome. Do you curious to discover the underground and mysteries of Rome? Here 9 underground places of the capital you should visit!  This article, therefore, provide you with some addresses of Rome underground I strongly recommend if you are a lover of discovery of unusual sides of the Eternal City.

Every city in the world holds a treasure hidden in the depths below the surface. Rome buried treasures it preserves many, the refutation of magnificence exposed to sunlight. But this other “side of the Moon” is, unfortunately, largely unknown, not only for tourists but also for its own inhabitants who daily walk on its cobbled streets without knowing what are underneath. 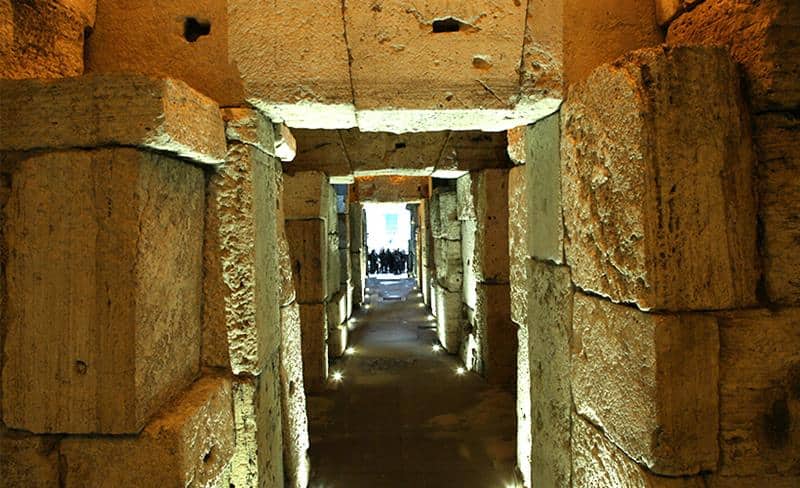 The Colosseum Underground. An unprecedented Colosseum as you’ve never seen.

Finally you can visit the underground, which will be accessed from the section of the monument that includes the monumental Gate Libitinária likewise restored during these interventions.

The descent to the underground rooms will allow you to reach a key part in the monument’s visit.

In the Coliseum transiting the slaves through passages moved to perform their services without viewers noticing anything and without harming the shows. The animals captured and brought in the most remote corners of the Empire. They kept the gladiators and prepared to fight before you get to the arena. These are the spaces that tell the story behind the long days of the Colosseum.

The underground, the business route will you take to the apexes of the monument, in an area only recently restored and reopened only for those who come by metro: the third ring. This area was opened in the 70s, but is considered risky, was almost immediately closed, to be enjoyed in private, for a short time. This tour is amazing because the most important ancient monument in the world will give you access to the circulation areas that tell the history of Rome. 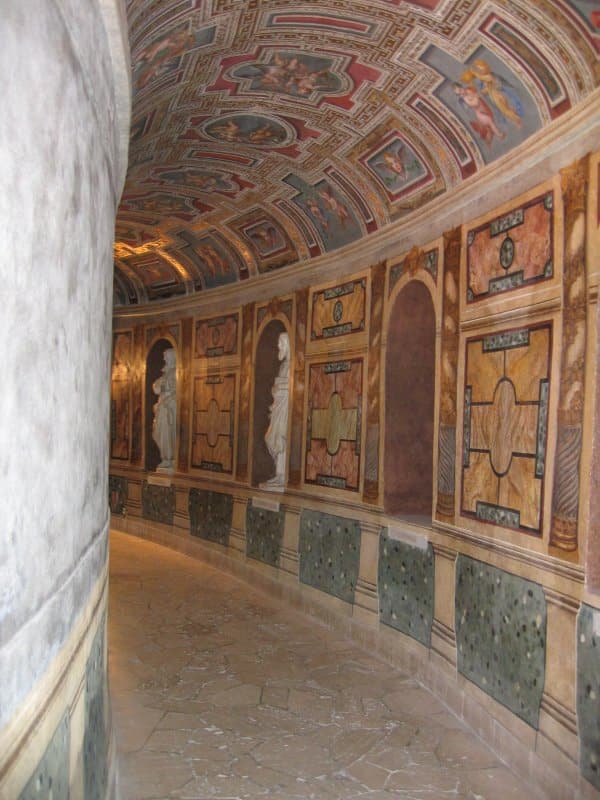 Basement of St Peter’s Basilica. Vatican Necropolis is located below the level of the caves, in correspondence with the central nave of the basilica and was found during the pontificate of Pius XII Pacelli (1939-1958) in the years between 1939 and 1949.

Then appeared a double row of sepulchral buildings, dated between the II and the beginning of the fourth century, placed next to each other from west to east on a slope, then the construction of the Basilica Constantiniana.

The interior is decorated with paintings, stucco decorations and sometimes tiles to reach the austere tomb of the Apostle Peter, the culmination of the visit.

It is absolutely forbidden to carry bags, backpacks, cameras and large objects and medium. If necessary to bring, you have to get at least 40 minutes in advance to let them in “deposit Objects” of the Vatican. Visit prohibited for children under 12 years.

Tours in Rome – Angels & Demons with underground in Piazza Navona 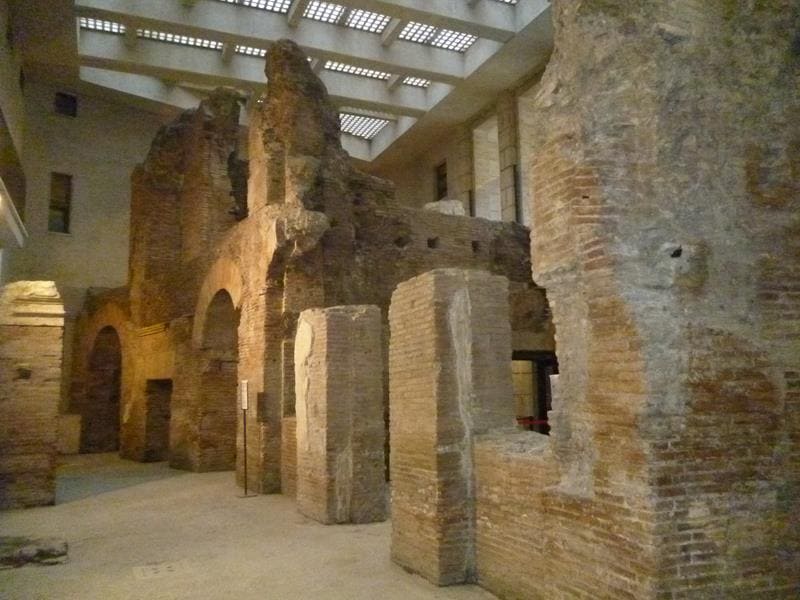 Based on the success of the Dan Brown thriller, the suggested itinerary focuses on visiting the actual places mentioned in the american writer best-seller on the path of the Illuminati. This is the so-called “four altars of science”, which should lead the followers of the sect – who were asked to decipher complex symbolism – to the “Church of Enlightenment”, that is Castel Sant’Angelo.

It is a route in places of Rome Monumental in which we will review parts of the novel script, comparing reality with exceptional fantasy of the famous writer. It is a visit characterized by descent underground to Piazza Navona to visit the ruins of the Stadium of Domitian, structure dedicated to athletic contests in ancient Rome. 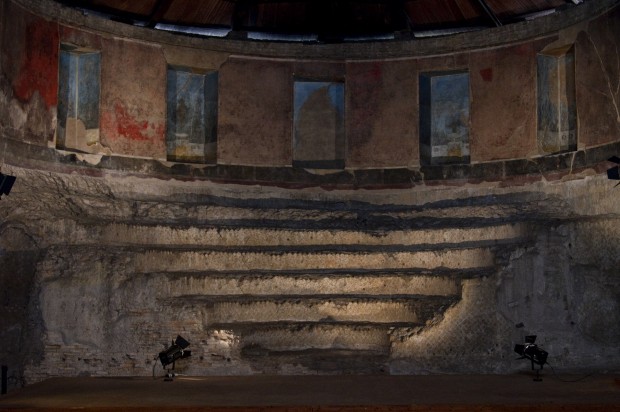 The discovery of the village and the Maecenas Auditorium happened by chance in 1874, during the opening of Via Merulana. The large complex at the turn of Serviane walls, was only preserved the so-called “Auditorium”. It is an apse of 24 meters long, was a basement at the time, and is built on tufa reticulate. In the rectangular room, known place of culture, opened six wall for niches, probably adorned with statues.

A vaulted ceiling to protect the site, decorated with frescoes, with a marble decoration planned mainly on the niches thresholds and porch steps. The material used is marble Caristio (commonly called “Cipollino”). 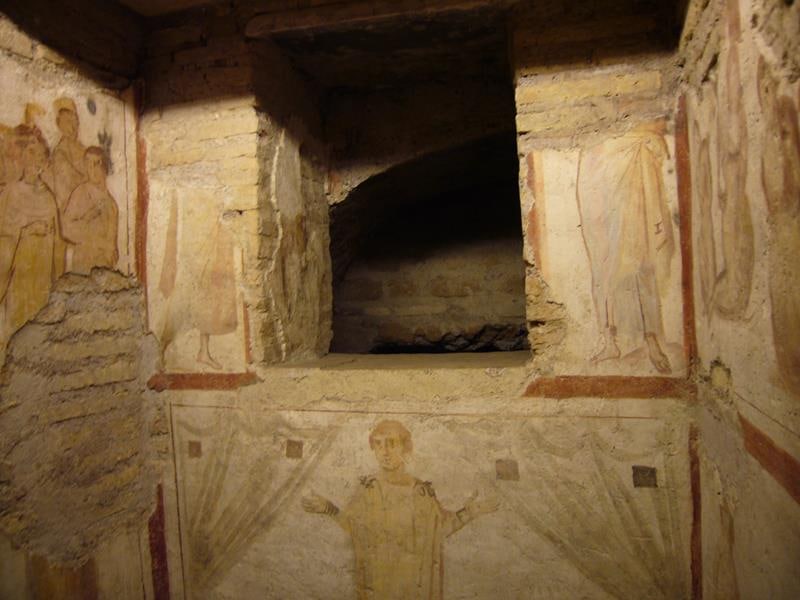 Basilica of SS. John and Paul Underground. Roman houses on the Celio represent a wonderful example of documentation of an original architectural solution of three Roman houses of the 2nd century AD transformed in the first half of the third century in a building with a porch with store at street level. In the 4th century AD, the building becomes a mansion belonging to this period beautiful preserved decorations.

The last transformation is datable to the same 4th century AD., when, because of the martyrdom of SS. Giovanni e Paolo (but Crispus Crispiniano and Benedicta), has held the “Confessio”. A rectangular Nicha with a raised landing decorated with paintings of Christian themes. Finally we come to the 5th Century AD, the date of construction of the beautiful Basilica.

Roman houses are therefore an almost unique example in pictorial conservation Rome that are exclusive and unique in its kind. A modern museum inside preserves pottery, amphorae and precious material found during the excavations. 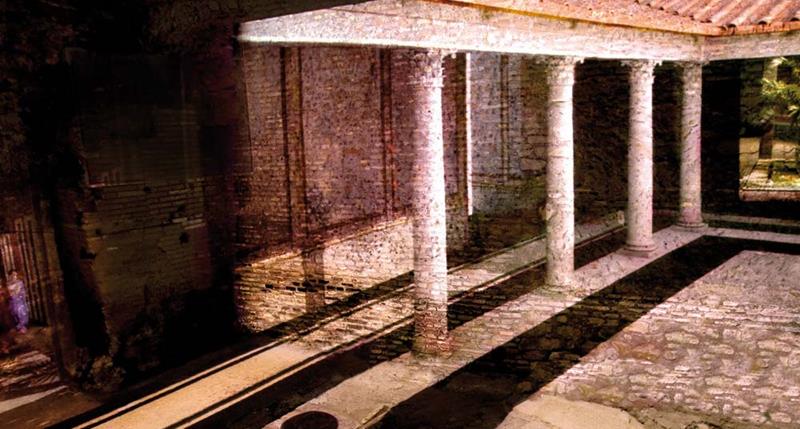 The Domus under Palazzo Valentini covers an area of about 500 square meters.

A private spa area with hot and cold water pools, one domus judges and senators of the 3rd century AD.

Among the ancient objects found there are two sculptures of the 2nd century AD large size and high artistic quality representing two togas.

The discovery demonstrates the existence of an exclusive neighborhood just behind the Trajan Forum and the center of public buildings of ancient Rome.

If alone the extraordinary nature of this work makes certainly unique, it is richly enriched by multimedia context designed by Piero Angela and contemplating virtual reconstructions around the visitor, as extraordinary as original. A visit to really appreciate, unforgettable!

Tours in Rome – The Basement of the Basilica of St. John

The Lateran is one of the richest areas of Rome in history and archaeological evidence. Particularly the Basilica of Lateran in its basement houses an insight into the history of the most prominent present throughout the Urbe. old complex of buildings, including a mansion built the century I.

With wall extraordinary paintings and the barracks of the imperial horse guard, then destroyed by Constantine, as well as a civilian tenement of the third century. A cornerstone and a large central courtyard make this place be absolutely unmissable and of particular interest. You can also visit an old imperial kiln.

Tours in Rome – The Basement of St Cecilia in Trastevere 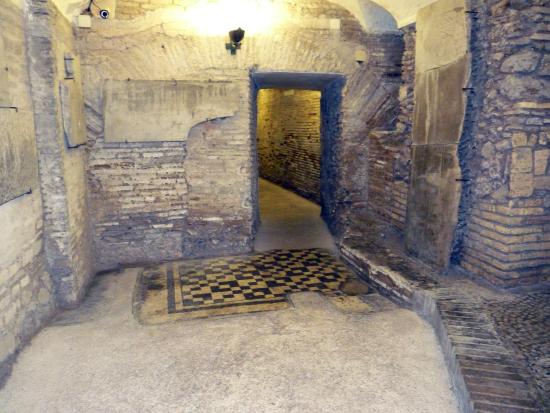 The Basilica of Santa Cecilia, located in the square of the same name, is home to the Roman martyr Cecilia and her husband Valeriano.

Excavations under the church, carried out during the restoration of 1899, actually marked a group of old buildings of the republican era.

With walls of tufa stone and a Doric column.

The building shows restorations and renovations later period 4th century, when it was joined with other existing buildings that date back to the republican period. In addition to different environments built in masonry and with remains of mosaic floors, there is also a large living room characterized by the presence of seven cylindrical tanks bricks.

The house was transformed into a titulus (called Ceaciliae) already in 5th century as St. Gregory the Great, built the first basilica in the century. St. Cecilia trying to convert Valeriano and his brother Tiburcio, was martyred in 230 A.D. in the church basement.

Where it is still the calidarium, or the environment in which the martyr suffered for three days, torture. Once passed the third day and she had not been suffocated by burning vapors, his captors beheaded by order of emperor Marcus Aurelius Severus Alexander also known as Alexander Severus. 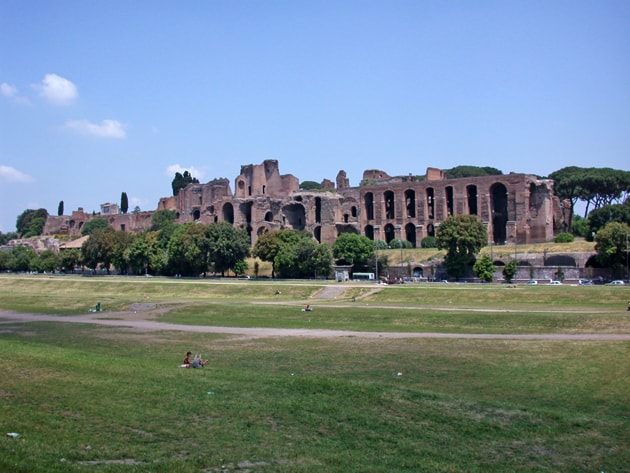 The Mitreo was discovered in the course of the work in the 30s for the creation of the deposit to the scenes of the Opera National Theatre in the old factory Pantanella masses, the city of Rome had bought in the twenties and for the headquarters of the Museums Rome. It identifies a large building of the 2nd century AD., repeatedly modified and whose ground floor 3rd century AD. was adapted to Mitreo.

The Mitreo Circus Maximus is one of the largest places of worship of God Mitra known in Rome. A magnificent white marble relief evokes the tauroctonia ceremony, during which they killed a bull, following the example of Mitra that flanked the Cautes and Cautopates, Sol and Luna, takes the dagger against the sacrificed animal.

In order for you to the chance to make all of our tours private without rushing and be sure not to miss any top tourist attractions, we suggest hiring a private driver to make the most, who will also guide you through the tour. We have van service with drivers (and guides) all year’s day we are ready to welcome you at the airport or the hotel which will take you, a perfect way to explore this wonderful city!

Previous PostDay Trips from Florence - The best tours around Tuscany on a full-day sightseeing with hot air balloon flights Next PostRome walking tours. A beautiful walk in the Roman Forum, is one of the richest archaeological areas of Rome in ancient times