Tuscany Tour – Pisa and Lucca in one day from Rome, one of the most sought-after destinations in the Italy

Comments Off on Tuscany Tour – Pisa and Lucca in one day from Rome, one of the most sought-after destinations in the Italy

Tuscany is, without any doubt, one of the most desired travel destinations in Italy. Cradle of the Renaissance. How to get to know Pisa and Lucca two towns located in  the heart of northern Tuscany, manages to maintain a perfect balance of culture and entertainment for all members of your family!

Pisa is a city in Tuscany, straddling the Arno, contains more than 20 other historic churches, several medieval palaces and various bridges across the Arno.

Much of the city’s architecture was financed from its history as one of the Italian maritime republics.

Its known for its Leaning Tower built at the end of the 13th century designed to be the belfry tower of the cathedral, but soon after your inauguration, in a land composed of sand and clay. The tower’s foundation began to sink and tilt. Now known throughout the world, rather than a design flaw engineering, a miracle in equilibrium.

The church of Santa Maria della Spina this small Gothic church on the banks of the River Arno was built in the 13th century, whose ceiling is decorated with “needles” containing statues of apostles and saints.

The name of della Spina (“of the thorn”) derives from the presence of a thorn, part of the crown of thorns placed on Christ during his Passion and Crucifixion. The relic was brought to this church in 1333.

Across the river, you arrive in the Square of Miracles, or Field of Miracles, it’s an UNESCO World Heritage site and contains the city’s most famous sights.

The splendid cathedral of Pisa, fine romanesque style, with double aisles and a cupola, a large apse mosaic painted by Cimabue in 1302, and a fine pulpit by Giovanni Pisano in Gothic and Renaissance style. 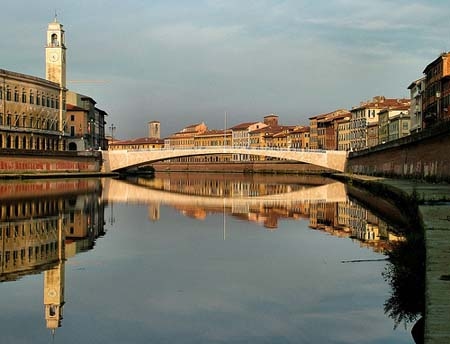 The Baptistry with the large round romanesque dome with many sculpted decorations and beautiful view that appear from the top. Go to the top, the view is worth is, and climbing tilted stairs is an interesting experience. Arabic-style pavement, pulpit by Nicola Pisano and fine octagonal font.

Discover facts about the life of Galileo Galilei, a fact occurred there joined story, the Italian scientist (then professor of mathematics at the University of Pisa) is said to have dropped two spheres of different masses from the Leaning Tower of Pisa to demonstrate that their time of descent was independent of their mass, according to a biography by Galileo’s pupil Vincenzo Viviani, composed in 1654 and published in 1717.

Pisa Tours, Tickets, Activities and Things to Do 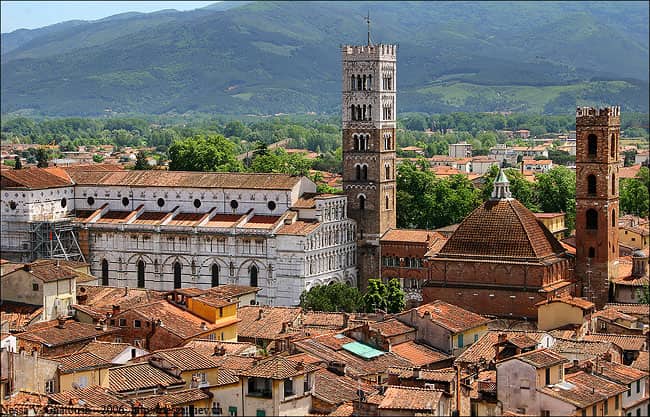 Lucca with its beautiful wooded and medieval alleys, country surrounded by a wall of 4 kilometers in length and 12 meters in height, very well preserved, 400 years ago.

Lucca was a Roman military camp and little has changed since the Middle Ages. The views along the fortifications are breathtaking, the ride worth it.

The attraction are also, the Basilica of San Frediano, is a Romanesque church in Lucca, situated on the Piazza San Frediano.

The famous amphitheatre square was reconstructed between the 1830 and 1839,  in an integrated square basing on the old structure of closed Roman amphitheatre, maintaining its disposition, closed elliptical form, the characteristic elements of the Romanesque architecture.

Visit the San Martino cathedral which contains the Tomb of Ilaria del Carretto, located in the sacristy. The work has been marvelously built by Jacopo della Quercia in 1410. Ilaria, wife of Paolo Guinigi, Lord of Lucca, died in childbirth. Upon her death, Paolo commissioned the sculptor.

The sarcophagus shows the young woman sleeping. In the finished work, she reclines peacefully with a dog, symbol of fidelity, at her feet. The work is one of the best funerary sculpture pieces of the 15th century. It is built out of marbles with a base of stone. 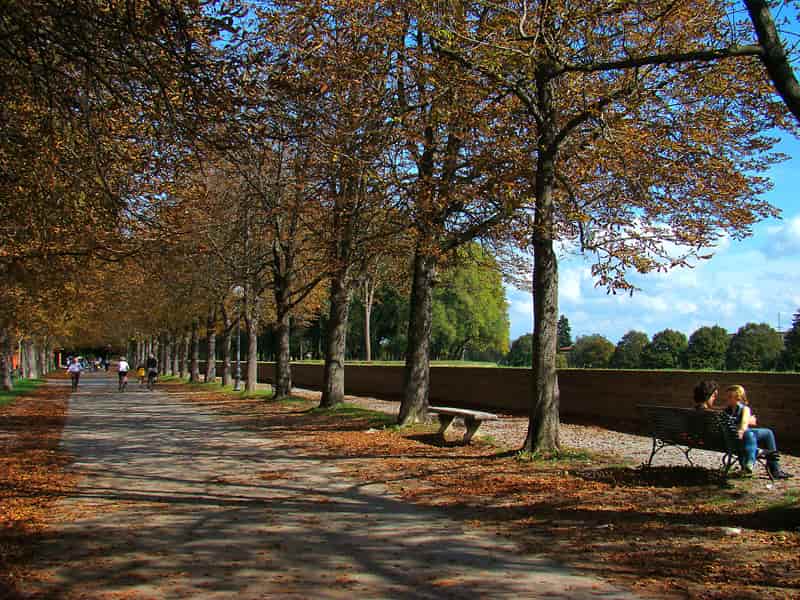 Explore the square of Napoleon, “Piazza Grande”. With your Ducal Palace the neoclassical place that serves as headquarters to the Province’s administrative offices.

This piazza plays hosts to some of the city’s most important cultural events and concerts, like those organized during the “Lucca Summer Festival”.

If you are a fan of opera, the city of Lucca is worth a visit because it’s the city where the composer Giacomo Puccini was born, then there are several references to it in the city, especially of the Piazza Napoleone, from Teatro del Giglio, from the Cathedral of San Martino (Duomo).

The Guinigi Tower over Lucca from one of the city’s most famous landmarks, a medieval tower. We will visit also the Palazzo Pfanner, one of the most splendid aspects of the palace is it’s perfectly manicured, Italian garden style.

Thought to be designed and brought to life by well-known landscaper, Filippo Juvarra in 1700 it is a beautiful blend of natural colour and man-made art. Lemon trees, rose bushes, intricately carved statues and gushing fountains line the pathways of Palazzo Pfanner’s garden which has earned its appearance in several famous Italian films.

Lucca Tours, Tickets, Activities and Things to Do

In order for you to the chance to make all of our tours private without rushing and be sure not to miss any top tourist attractions, we suggest hiring a private driver to make the most, who will also guide you through the tour. We have van service with drivers (and guides) all year’s day we are ready to welcome you at the airport or the hotel which will take you, a perfect way to explore this wonderful city! City tour tickets!

Previous PostTours of Tuscany - Explore the Chianti countryside on this full-day private tour of Siena and San Gimignano Next PostDay Trip from Rome to Assisi, Viterbo and Orvieto, places to visit in Italy, a beautiful historical and stunning walkthrough layers of history in the underbelly of this cities