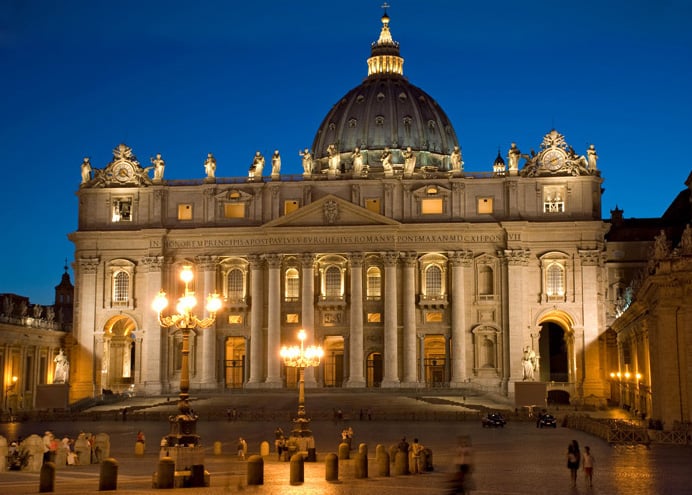 St Peter’s Basilica. The imposing facade of the 17th century performed by Carlo Maderno makes you understand the greatness which can be inside to the St. Peter’s Basilica, which is still one of the largest churches in the world.

The original construction of the St. Peter’s Basilica it was a size comparable to the current building, built around the year 320 by the emperor Constantine in the place where, according to tradition, was buried the apostle Peter.

Over the centuries and under various pontificatus began the long process that in some two hundred years and with the help of many artists (Bramante, Michelangelo, Bernini), would lead to the complete restructuring of the basilica begun by Constantine.

The dome designed by Michelangelo surprising for its size and harmony.

Particulars that are appreciated in the difficult but rewarding climb that allows you to closely admire the interior and the exterior.

Among the many masterpieces, you should not miss the Pietà of Michelangelo, a work that surprises for centuries for its technical and excitement.

In the Vatican grotto, it under the church, a little higher compared to the Basilica of Constantine in the 14th century.

The cave contain chapels dedicated to different saints, tombs of kings, queens and popes from the 20th century onwards.

The holiest place is Peter’s tomb. Where the shrine, built in the fourth century by emperor Constantine, about it is assumed that was buried the apostle of Christ.

In one of the chapels around the apse you will see the fresco of the roman painter of the fourteenth century Pietro Cavallini: is the “Madonna of Bocciata”. So called because of the swelling in his face that according to an ancient legend, she started bleed, after that the drunken soldier, having lost the glasses, had fired on the sacred image.

In this place they are located the tombs of the popes Paul VI (1978) and John Paul II (2005). The external colonnade of 284 Doric columns and 88 columns of travertine of Tivoli around the St Peter’s Basilica. Placed almost representing an welcome with a big hug to the faithful that visiting.

The stunning architecture of the colonnade was commissioned by Pope Alexander VII to Bernini. Which radially arranged four rows of 284 columns, whose diameter was gradually increasing, thus allowing, keep unvaried the proportional relations between the spaces and columns even into outer lines.

Thanks to this provision, the viewer can observe a unique curiosity. You go to the porphyry disks around the obelisk and positioned on top of this, you will see the composite columns in a single row.

Avoid going to visit the St Peter’s Basilica on wednesdays and sundays. At the wednesdays there is a papal audience in the square, and it is full than faithful. And every sunday, religiously at 12:00am, the Pope appear in public to celebrate the Angelus (or Touch of Hail Marys). When grants his blessing in an audience in St. Peter’s Square.

You may not enter the Vatican with short clothes, short skirts, sweaters with necklines or those that leave the shoulders out. Lately they are losing a bit these rules, but it is worth respect since you are in a sacred place.

To visit the Vatican (vatican city tickets), remember that St. Peter’s Basilica has free admission, from 7:00am to 7:00pm.

Previous PostItalian food. Traditions held by dishes whose flavors of live and share and experience, culture and leisure.Typical products of each region Next PostPrivate Vatican tours. Sistine Chapel visit is one of the greatest art treasures of all time. It is the last room in the Vatican Museums!