Italy Holidays. Art and culture … near the coast.

Romanesque churches, medieval libraries, byzantine mosaics, majestic designs for the great magnates of the Renaissance, archaeological sites and ancient buildings that house rich collections of art from all eras. They are just some of the wonders to visit, a few miles from the coastal, thanks to excellent connections between major beach resorts and major cultural centers.

An immersion in Renaissance architecture for those who visit Ferrara, the imposing and majestic buildings of the historic center, the Delizie Estense, houses and castles of the lords of Ferrara scattered throughout the territory.

A wonderful journey through the different cultures of the mediterranean, among oriental mosaics, monuments and churches of Ravenna, whose historic center, as well as that of Ferrara, was included in UNESCO’s list of World Heritage for artistic and architectural value.

Ravenna is visited on foot or by bicycle. A hotel in the center is therefore ideal, the Palazzo Galletti Abbiosi, with parking, rich buffet breakfast and free bicycle rental, combines pleasure and comfort with its exquisite interiors and an enviable location. In front of the hotel the Basilica of St. Apolinario Novo, the first leg of this tour in Ravenna.

It is one of eight UNESCO monuments of the city (since 1996). Built by Theodoric between the year 493 and 496 as an Aryan temple and then consecrated to catholicism. Inside, the first mosaic decorations of this tour. Set of small colored tiles resulting from a great artistic domain that made Ravenna famous all over the world.

A city that knows everything in a short time – the church of San Francisco rebuilt in the 20th century, in the ruins of the old structure of the 15th century, is recognizable by the sober brick facade.

The church has many entrances, and you leave in a charming garden where you can find the magazine bench Braccioforte, the oratory of the 15th century.

A little further on, almost hidden along a railing, Dante’s tomb. A small temple that houses the remains of the great Florentine poet, who died in exile in the city of Ravenna in 1321.

A low-relief from the late 15th century, it shows you thoughtful about the city’s much-disputed ruins of origin and adoption. The museum next door has an interesting aspect of Dante’s life with memorabilia, documents and multimedia contributions.

The first, named after Bishop Neone who cured the current appearance, dates back to the fifth century and is the oldest of Ravenna’s monuments. With the exterior of bricks in an orthogonal plan, presents Byzantine and early christian elements, marbles, and of course, mosaics, constant presence in the city.

The second, only orthodox building during the reign of Theodoric, when the predominant religion was Aryan, was born as a private oratory. To its interior the mosaics of the 5th century that describe the martyrs.

Typical of catholic orthodoxy, flocks of birds and an unusual Christ in a military dress. In the chapel is located the museum of the Archbishop, in turn, host of the Episcopal Palace, which gathers Christian relics of the city’s first cathedral, the Ursiana Basilica (5th century).

It is on the ruins of the latter that since the 18th century is the cathedral of Ravenna, imposing building with a cylindrical bell tower and baroque facade. It is also nearby, the Garden of Erbe Dimenticate, an oasis of peace with aromatic and medicinal plants.

The city of Ferrara is a refined trip in the elegance of its architecture and its works of art.

The maximum expression in the medieval and Renaissance periods. In the central part of the Republic Square, one starts with the Estense Castle, built in 1385, surrounded by the waters of the moat, which is a clear symbol of the power of this family, which left indelible signs everywhere.

The Town Hall, united to the castle by a covered passage, dated in year 1200 and was the ducal residence of the Estensi.

The palace in the cathedral square built in the 20th century, with a large facade begun in Romanesque style and at the top in gothic style, a splendid synthesis of styles.

In the Cathedral Museum (Via San Romano) are artifacts and sculptures mostly from the cathedral, including the doors of the old organ painted by Cosme Tura, panels of the 13th century of the Porta dei Mesi, together with tapestries, cutlery, paintings and illuminated manuscripts.

On the south side of the Loggia dei Mercanti, a row of old shops, present since the Middle Ages. There are many buildings that enrich the streets, such as the Palazzo Schifanoia desired by Alberto V d’Este in 1385 and later expanded.

Today it is the Museum of Ancient Art, which houses the great Hall of the Months, painted in the middle of the fourth century and set of various works.

Palazzo Costabili, nicknamed “Ludovico il Moro”, today the National Archaeological Museum, houses thousands of artifacts from the ancient Etruscan town of Spina, a Greek-Etruscan city that developed in the seventh and sixth centuries BC.

Facade in relief of white and pink marble, the Palazzo dei Diamanti built by Sigismondo d’Este, where on the main floor is the National Gallery of Art, on the ground floor the seat of some beautiful temporary exhibitions, which still make Ferrara famous today. 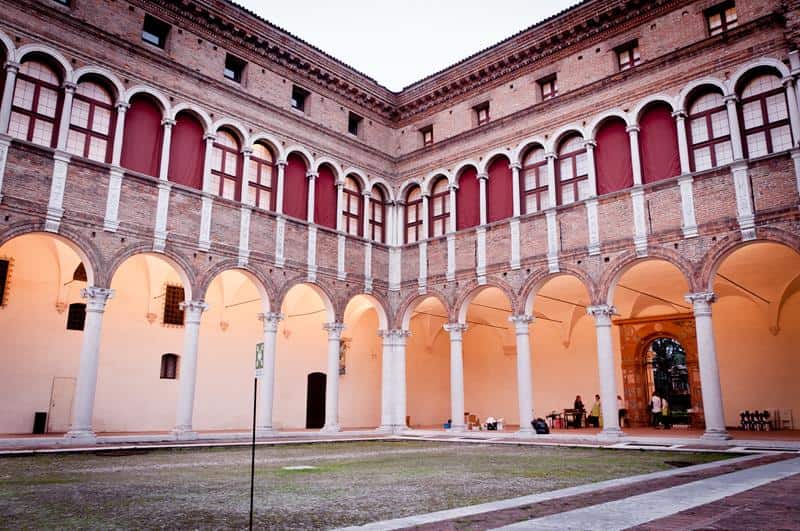 The towns of Forlì and Cesena, which under the modern facade hides endless traces of ancient civilizations offer an exciting journey through history. Interesting juxtapositions between contemporary culture and ancient roman and medieval ruins.

In the center of Rimini and in the territories of the province, where events and cultural initiatives linked to tradition animate all year round the boroughs and squares of the center.

Absolutely not to be missed, for those who spend their holidays in Rimini or on the Adriatic coast, a visit to the Republic of San Marino, ancient medieval city that receives millions of tourists.

Attracted both by the particular and wonderful profile of Mount Titano, which from the Riviera looks like a great stone ship on the horizon, both because of the long history of independence and the old traditions that have always characterized this little Republic.

Previous PostHotels in Milan Italy. You can choose from the star hospitality of classic,elegance and modern, or unusual accommodations! Next PostMerry Christmas in Italy - Do you curiosity in finding ten festive Christmas markets for your trip to Italy holiday? Here is one of the most magical times